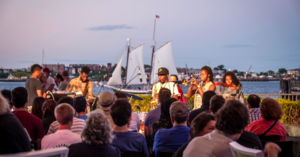 One of the best things about Boston in the summer: You’re never far away from a free concert happening almost every day of the week outside under the sun or stars. Here’s a comprehensive list of free summer concert series and festivals in parks, public squares, beer gardens, and more.

(See all #freeconcerts this summer, listed chronologically and displayed on one map.)

Berklee Summer in the City

Berklee College of Music students, faculty, and alumni will perform more than 400 free concerts at notable venues in and around Boston as part of Berklee's Summer in the City concert series.

One of Boston’s most beautiful settings, the courtyard of the Central Library in Copley Square is filled with music during free, one-hour concerts throughout the summer. The courtyard hosts music that ranges from jazz to classical and from world to folk.

Boston Harbor Hotel’s annual Summer in The City entertainment series returns for its 21st season with each night sporting a different theme.

The Boston Calling Block Party series brings free concerts to Dewey Square across from South Station. Stop by every Thursday from 5-8 p.m. all summer to check out live bands, play lawn games, or enjoy the cash bar.

Thursdays on the Lawn at the Loring-Greenough House

Tree House Brewing Company teams up with Berklee to present Thursday evenings with music, beer, wine, and food on the lawn of the south garden in the Prudential Center. Concerts begin at 5 p.m. and will feature eight Tree House beers on draft.

Aeronaut Brewing Company’s pop-up beer garden on Harvard Ave. in Allston returns every Wednesday, Thursday and Friday with one of the area’s best-curated selections of emerging local artists. Check the Facebook page for an updated list of performers.

Titus Sparrow Park in the South End hosts free summer concerts every Wednesday night through August from 6:30 to 8 p.m.

Medford’s Condon Shell hosts free concerts on three Thursdays this summer. Bring a blanket and enjoy food from the nearby farmers’ market.

Club Passim and Harvard University bring free live music to the Science Center Plaza every other Friday at noon through September 27.

NEMPAC Jazz in the Park

North End Music and Performing Arts Center presents a series of four concerts to the North End Greenway Park, every Tuesday evening in July from 6 p.m. until 7:30 p.m. The series brings together a mix of different cultures through contemporary jazz sounds including Latin, funky, and Mediterranean, and world music.

The Boston Parks and Recreation Department presents the 2019 ParkARTS Citywide Neighborhood Concert Series from July 10 to August 5 in parks citywide.

Harborwalk Sounds at the ICA

The Institute of Contemporary Art and Berklee have partnered for more than 10 years for Harborwalk Sounds. Performances are free and open to the public on Thursday nights at 6 p.m. from July 11 to August 29. Check out the museum’s dynamic exhibitions -- admission is free after 5 p.m. on Thursdays -- then head to the ICA’s outdoor grandstand on the waterfront.

Taking place Thursdays in July and August at outdoor locations across Boston, the six-concert Tito Puente Latin Music Series presents a soundscape of live Latin music with a strong salsa influence in parks around the city.

An urban garden located on a hillside just outside Union Square, the Somerville Community Growing Center hosts a series of Thursday night concerts in July, August, and September featuring a wide range of genres.

Each month from June to September, the Esplanade Association partners with a different local nonprofit to showcase a diverse set of performers and musical styles at the Hatch Shell.

Elma Lewis Playhouse in the Park

Founded in 1966, the Elma Lewis Playhouse in Franklin Park has hosted magnificent musical acts such as Duke Ellington and the Billy Taylor Trio. The Tuesday evening concerts showcase talent from the local communities and neighborhoods.

The Boston Landmarks Orchestra hosts a series of free concerts this summer at the Hatch Memorial Shell, celebrating the 90th anniversary of this annual tradition. Concerts will be held every Wednesday at 7 p.m. from July 17 to August 21.

If all those free concert series aren’t enough for you, don’t miss your chance to see free live music at one of Boston’s many festivals and special one-off concerts.