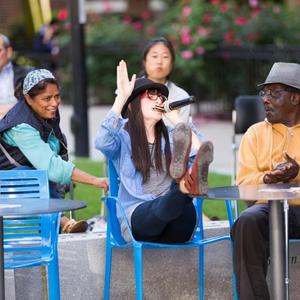 Sunset Concerts at Symphony Park feature Berklee musicians in one of Boston's most charming outdoor spaces, located between Berklee College of Music and Symphony Hall. Concerts will be held, weather permitting, on Tuesdays from July 9 through July 30, starting at 5:30 p.m. This series is brought to you by Berklee College of Music, the Friends of Symphony Park, the Fenway Civic Association, and Boston Parks and Recreation.

Vivian Valls, known by many as ViVi, is a female singer-songwriter, artist, and producer born and raised in Miami, Florida. Her first single, “Comp4urlove,” was released in February 2019 and is available on all streaming platforms.

Dreion is a vocalist, songwriter, and performing artist from Omaha, Nebraska. As a student at Berklee College of Music, majoring in songwriting with a minor in Africana studies, he balances his academic and performing life with being a husband and a father.

Sarah Messias, a harmonica player and singer from Brazil, is influenced by blues and rock.

Natalie Castro is a 19-year-old Canadian singer and Berklee College of Music student who began singing at age 4 and hasn't stopped. Training with vocal coaches such as Paula Griffith, Castro wins over audiences with charisma and humility.