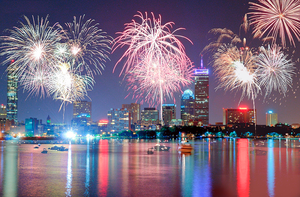 More details for the 2020 Boston Pops Fireworks Spectacular is TBA.

The 2020 Boston Pops Fireworks Spectacular is free and open to the public and is held at the DCR Hatch Shell on the Esplanade located at 47 David G. Mugar Way, Boston, MA.

Nearly ninety years ago, before Arthur Fiedler became Conductor of the Boston Pops, he was struck with an idea that was to transform the orchestra’s relationship to the City of Boston. He believed that if great literature was available for free in public libraries, and masterpieces of art could be viewed for a modest fee in museums, then great symphonic music should be accessible to the masses on a similar basis.

Fiedler, who was at the time a violist in the Boston Symphony, as well as a conductor of his own ensemble, set about raising funds to bring his idea to fruition. After two years, on July 4, 1929, the first free Esplanade Concert was performed at the specially constructed acoustic shell along the banks of the Charles River.