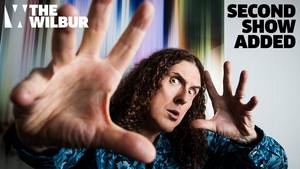 FEW WOULD HAVE GUESSED that “Weird Al” Yankovic – who as a shy, accordion-playing teenager got his start sending in homemade tapes to the Dr. Demento Radio Show – would go on to become a pop culture icon and the biggest-selling comedy recording artist of all time, with classic song and music video parodies such as “Eat It,” “Like a Surgeon,” “Smells Like Nirvana,” “Amish Paradise,” “White & Nerdy” and “Word Crimes.” Now in his fourth decade as America’s foremost song parodist, he has been honored with four Grammy® Awards and fifteen nominations, including a 2015 win for his 14th studio album Mandatory Fun. In May 2017, the Hollywood Chamber of Commerce announced that Weird Al would be receiving a star on the Hollywood Walk of Fame.

In November of this year, Legacy Recordings will release Squeeze Box: The Complete Works of “Weird Al” Yankovic, a career-spanning box set of all 14 of Al’s studio albums remastered for 150-gram vinyl and CD formats, plus an exclusive rarities album and 120-page book of archival photos, all housed in a replica of Weird Al’s trademark accordion.

Released in July 2014, Mandatory Fun became the first comedy album in history to debut at #1 on the Billboard Top 200 chart, and the first to reach the top of the chart since 1963. Yankovic set the U.S. record on Spotify for having the most tracks from one album in the viral top 10 at one time, taking the first four spots. Internationally, the album debuted in the Top 10 in both Canada and Australia (#3 and #9 respectively). In addition, ”Word Crimes” debuted in the Billboard Top 40, making Al one of only four artists to have had Top 40 singles in each of the last four decades – the other three are Michael Jackson, Madonna and U2.

For Mandatory Fun, Al blew up the internet by releasing eight music videos in eight days, including “Tacky” (the star-studded parody of Pharrell Willliams’ “Happy”) and “Word Crimes” (an animated grammar lesson to the tune of Robin Thicke’s “Blurred Lines”). Combined, the videos accrued more than 46 million views in their first week. In 2015 and 2016, Weird Al’s Mandatory World Tour encompassed 200 shows throughout the U.S., Canada, Europe and Australia, including two nights with a full orchestra at the Hollywood Bowl and a tour-ending sold-out show at New York’s Radio City Music Hall.

Among his many other past music and video milestones, Yankovic’s 2006 album Straight Outta Lynwood spawned the Platinum Billboard Top 10 anthem “White & Nerdy,” while the video spent two straight months at #1 on iTunes.

In addition to his 1989 cult-hit feature film UHF, his late 1990s CBS Saturday morning series The Weird Al Show and numerous AL-TV specials he has made for MTV and VH1 over the years, Yankovic has remained a staple of film and television, from appearances on The Simpsons and 30 Rock to performing on the 2014 Primetime Emmy Awards. More recently he guested on ABC’s Galavant (as a singing monk) and The Goldbergs (as the ‘80s version of himself). In the spring of 2015 Yankovic joined the fifth and final season of IFC’s Comedy Bang! Bang! as its co-host and bandleader. Al can currently be heard as the voice of the title character in Disney XD’s animated series Milo Murphy’s Law. Additional voiceover work includes Gravity Falls, Wander Over Yonder, Adventure Time, My Little Pony: Friendship is Magic, The 7D, Teen Titans Go!, We Bare Bears, Pig Goat Banana Cricket, Uncle Grandpa, Voltron: Legendary Defender, Bojack Horseman, and the DC animated feature Batman vs. Robin.

Other notable past projects include the 2009 themed attraction Al’s Brain: A 3-D Journey through the Human Brain, featuring cameos by everybody from his mother-in-law to Paul McCartney. Two years later, Comedy Central broadcast and released the concert special “Weird Al” Yankovic Live: The Alpocalypse Tour, filmed at Toronto’s venerable Massey Hall. Yankovic added “New York Times bestselling author” to his resumé in 2011 with the release of his children’s book, When I Grow Up (HarperCollins), followed two years later by My New Teacher and Me! An animated series based on his children’s books is currently being developed in partnership with the Jim Henson Company. 2012 saw the release of Weird Al: The Book (Abrams), an illustrated hardcover on Al’s life and career, and in 2015 Yankovic became not only MAD Magazine’s cover boy, but the first Guest Editor in their 63-year history.

2016 saw the release of George Fest: A Night to Celebrate the Music of George Harrison, featuring Al’s live performance of “What is Life?”

The past year has seen the June premiere of the Dreamworks animated film Captain Underpants, for which Al co-wrote and performed the film’s theme song, and the release by NECA Toys of the second in its line of retro-clothed Weird Al action figures. In August, Al wrote and performed “The North Korea Polka (Please Don’t Nuke Us)” on Last Week Tonight with John Oliver.

On February 27, 2018 Weird Al will launch The Ridiculously Self-Indulgent, Ill-Advised Vanity Tour, playing stripped-down shows in smaller, more intimate theatres across North America with his band of over three decades.