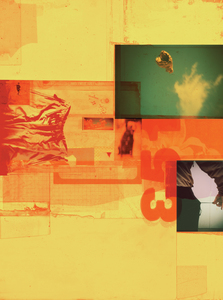 Selections of work taken from designer Vaughan Oliver’s extensive archive. The work spans design, fashion, music, and moving image. Over the years, his unique approach to design has attracted an impressive list of clients. He is noted for his work with independent record label 4AD, where he created designs for bands including the Cocteau Twins, the Pixies, Lush, the Breeders, and This Mortal Coil.

The exhibition has been curated by Associate Head of the School of Fashion at the University of Creative Arts, Lee Widdows, who says, “Walking Backwards offers a glimpse into the career of one of the most influential graphic designers of a generation." In addition to his impact on design in the music industry, Vaughan is also one of UCA’s most celebrated visiting Professors. He was awarded an Honorary MA by UCA in 2010 and is also an elected member of the Alliance Graphique Internationals (AGI).

Vaughan Oliver is an art director, graphic designer and consultant with 35 years experience of working in all areas of graphic design. Specializing in work for the music industry, Oliver's unique approach has attracted clients from a broader field including fashion, publishing, packaging, film and television, theater, architecture, retail, advertising, food, dance, erotica, football, and education.

In 2011 Vaughan was awarded an Honorary MA by the University of the Creative Arts (UCA), Surrey and a Visiting Professorship at The University of Greenwich. In 2013 Vaughan was elected into the AGI, Alliance Graphique International, a group of graphic designers with 643 members from 38 countries worldwide.

In 2014 Vaughan was awarded a further Visiting Professorship at the UCA, Epsom. He is also featured as one of 75 profiles of "Graphic Visionaries" from 100 years of graphic design published in 2015 by Laurence King.