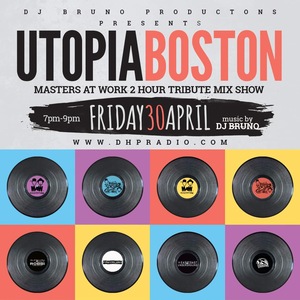 
Their name says it all – MASTERS AT WORK. For over a decade, "Little Louie" Vega and Kenny "Dope" Gonzalez have shepherded dance music down new paths with their inventive production style and imaginative feel for different musical forms.
The two native New Yorkers have amassed an overwhelming body of work in that time, one that includes hundreds of original productions, remixes and side projects, redefining the way we think of music in clubs. Vega and Gonzalez defiantly mix everything they can find – house, hip-hop, funk, disco, Latin, African and jazz – into a universal groove. And in doing so, MAW has become a cultural mélange unto itself, emblematic of the multicultural society in which we live

DJ Bruno has been Djing in Boston since 1987. He became known in the college scene in the late 80’s to early 90’s for mixing Hip Hop, Reggae, RnB & House Music. Then in 1991 he began a residency at the Boston Loft after-hours club with Armand Van Helden. In February of 1992 he started the Legendary Utopia Parties. And Utopia still remains one of Boston’s hottest deep house music events.

Due to the pandemic clubs are not open. So Bruno decided to take his music virtual. H.O.M.E. streams on Mondays from 11am-12pm on www.facethebassrecords.com and UTOPIA streams Fridays from 7pm-9pm on www.dhpradio.com.

DJ Bruno believes “IF WE DANCE TOGETHER, WE CAN LIVE TOGETHER!” When this pandemic ends, he will continue to spread that motto all over the world whether it be virtually or in person!

Check out DJ Bruno and past Utopia sets on his mixcloud at https://www.mixcloud.com/DJBRUNO_BOSTON/