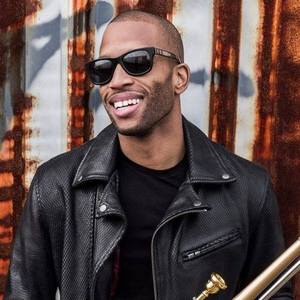 Troy 'Trombone Shorty' Andrews has God-given talent, natural charisma and a relentless drive to bridge music's past and future. His third outing for Verve Records, Say That To Say This (Sept. 10), co-produced by Andrews and kindred spirit Raphael Saadiq, sounds like nothing else out there, as Andrews and his longtime band, Orleans Avenue - guitarist Pete Murano, bassist Mike Ballard and drummer Joey Peebles - continue their natural musical evolution. In a very real sense, the torch is passed from one great New Orleans band to another on the new album, which features the first new studio recording from the original members of the legendary Meters in 36 years, as they revisit their 1977 classic "Be My Lady," with Andrews singing lead and playing horns.

The bandleader and multi-instrumentalist describes Say That To Say This as "really funky, like James Brown mixed with The Meters and Neville Brothers, with what I do on top, and we have a bit of R&B from Raphael's side. All the guys in my band are big, big fans of his, so this is a real dream come true for us. And he's a fan of New Orleans brass band music, which I didn't know beforehand. Just listening to his music and the direction he's going in now, I thought that he would be perfect to work with us. What drew me to him was his knowledge of what came before and his imagination of where the music can move forward to. That's the same way I think, so it worked out very well."

Saadiq doesn't just co-produce, he becomes a member of the band, playing a variety of instruments and contributing backing vocals; he also had a hand in writing three songs. Says Andrews of Saadiq: "He's a great producer, but he's also a musician, so he was able to get in there, jam with us and take us to some different places. And we were able to take him to some different places too."

"We felt a certain amount of pressure, because we knew we were working with one of the great young producers and musicians," Andrews acknowledges. "But it was good pressure, and Raphael being in the room with us inspired us to step up as writers and players. We spent an initial two or three weeks in the studio in L.A. working out the tracks, and I think having that stretch of uninterrupted time really played a big part in how creative we were able to get. On the last two records we were so busy touring that we would go in for three or four days and then go out for a week, so we had to switch on and off between the stage mentality and being creative in the studio. So this time, knowing we were gonna be in the studio for two or three weeks straight, we reached down deep and were able to do some things that we wouldn't have come up with if we'd been on a tight schedule. It allowed us to be very free."