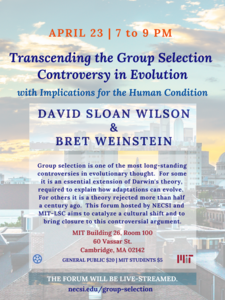 Group selection, or more generally Multilevel selection, is one of the most long standing controversies in evolutionary thought. For some it is an essential extension of Darwin's theory, required to explain how adaptations can evolve--or fail to evolve--at any level of a multi-tier hierarchy of units, such as from genes to ecosystems in biological systems or small groups to global governance in human social systems. For others, it is a theory that was rejected over half a century ago and need not be revived. Reaching closure on the group selection controversy would be a milestone for experts and the general public alike.

That is the goal of this forum featuring Bret Weinstein and David Sloan Wilson, organized by the New England Complex Systems Institute (NECSI) and hosted by MIT Lecture Series Committee (LSC).

$20 for general public, $5 for MIT Students with valid Student ID