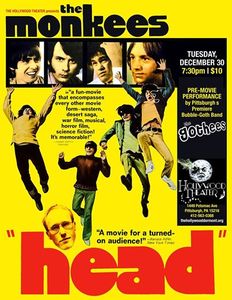 Shortly after their TV show closed its final curtain, the Monkees took to the big screen in this mind-bending experiment in pop art. Proudly without plot, this feature follows band members Peter Tork, Davy Jones, Micky Dolenz and Michael Nesmith on a trippy adventure through 1960s Hollywood, Calif., where they cross paths with such people as Dennis Hopper, Frank Zappa and Jack Nicholson. In a variety of vignettes and musical performances, the daffy antics of the band are on full display.

See all the titles in the series at: https://somervilletheatre.com/repertory-programs/