The McMullen Museum of Art 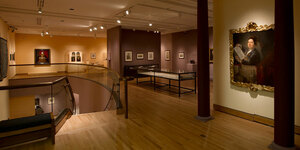 The McMullen Museum aims to cultivate learning, celebrate artistic excellence, explore the visual traditions of diverse cultures, and inspire transdisciplinary faculty and student research based on the visual arts. The McMullen offers exhibition-related programs and resources for diverse audiences of all ages on campus, in the Greater Boston area, and beyond.

With roots in an older departmental gallery, the Boston College Museum of Art opened in 1993 in Devlin Hall under the direction of Professor of Art History, Nancy Netzer. The Museum was renamed the McMullen Museum of Art in 1996 in recognition of a generous gift from John and Jacqueline McMullen.

The McMullen diverged from other university art museums in being faculty-driven with the aim of inviting transdisciplinary collaboration and research from faculty across the University working in collaboration with other scholars from around the world. The Museum has since produced more than sixty interdisciplinary exhibitions with nearly as many peer-reviewed catalogues, emphasizing that interrogation of artifacts as evidentiary documents is relevant to all disciplines of study.

About the McMullen Family:

The McMullen Museum of Art is named in recognition of its longtime patrons John and Jacqueline McMullen and the McMullen Family Foundation, in honor of John's parents, Isabella and Charles. The late John McMullen (1918–2005) held a PhD in mechanical engineering and served on the Boston College Board of Trustees from 1978 to 1986. He was a naval architect, businessman, marine engineer, and former owner of the New Jersey Devils and the Houston Astros. John McMullen shared his deep interest in art and collecting with his wife, Jacqueline. She and their children and grandchildren are cherished friends and advisors to the McMullen Museum and generously supported the renovation of its new home on Commonwealth Avenue.