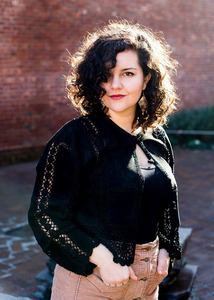 Like many other Boston folk acts with phenomenal personnel pairings, you can trace this group’s beginnings to Club Passim’s campfire. festival. During the 2016 Memorial Day campfire., Katie Martucci of The Ladles, Isa Burke & Ellie Buckland of Lula Wiles, Aurora Birch, and Rachel Sumner of Twisted Pine came together to close out the festival (lovingly dubbed The Ultimate Lady Hang), with an “in-the-round” wherein each brought songs, original and not, arranged for solo, duo and group settings. It was good. So good, that this was repeated for the Labor Day campfire. festival bringing Holly McGarry of Honeysuckle and Deni Hlavinka of The Western Den into the rotation for the round.
Rachel Sumner is an award winning singer, songwriter, and multi-instrumentalist based in Boston. Co-founder of the acoustic folk-pop band Twisted Pine and pan-folk trio Sumner & Moss, Sumner has proven herself to be a fixture in the Boston roots scene. She has performed on the main stages of major festivals like Grey Fox Bluegrass Festival, Celtic Connections in Scotland, Green River Festival, and FreshGrass Festival and has had the honor of performing with folk luminaries like Peter Rowan. She is currently working on an EP of original songs, due out in fall 2018.
Holly McGarry presents the dichotomy of a calm exterior with unbounded passion for music, with a lifetime of experiences able to lace her lyrics with profound insights, sharing her love, loss, and life through a simple six strings. The last four years McGarry has been playing and writing in the band Honeysuckle. She has two solo releases as well as three releases with the band. You can find the Boston based artist touring nationally and appearing at stages such as The Newport Folk Festival, Lollapallooza and CMJ.

Aurora Birch makes music in Boston, MA. An incorrigible tinkerer, Birch wears many hats in her music: songwriter, producer, arranger, composer, multi-instrumentalist, vocalist, and performer, most notably. The result, as evinced by her debut record, Brightness, is cathartically bewitching and contemplative folk-rock, gracefully bridging genre divides to inhabit an ethereal space of dreamy curiosity. Birch was the recipient of an Iguana Grant in 2016 to assist with the recording of her debut, and was a finalist for the 2017 No Depression Singer/Songwriter award. She performs frequently around Boston.