The Halloween Mash Up Show 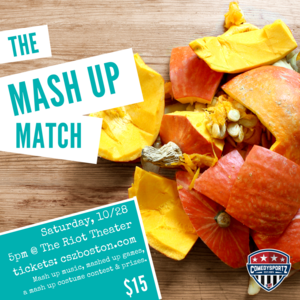 ComedySportz is celebrating Halloween with a mash up! It's the same great ComedySportz match of two teams playing competitive improv comedy, but we'll be mashing up EVERYTHING, from games to music, and anything else we can think of.

Grab your tickets to the Saturday, Oct. 28th, 5pm match, and check out:

- New Games: ComedySportz games mixed with other ComedySportz games (wuuuuut??)
- A Costume Contest: Ever seen a Taylor Swiffer? Kevin Costco? A Pumpkin Pie Chart? Loyal fans can vote for their favorite OR show up in their own costume to join in the competition for best mash-up costumes.
- Prizes: We'll have some awesome prizes from our JP neighbors, like Monumental Cupcakes, Faith's Naturals, Fresh Hair, Salmagundi and Polka Dog Bakery.
- Mash Up music!

**Tickets are $15 for general admission, $12 for students/military/seniors. Reserve yours and we'll see you there!**

About ComedySportz
ComedySportz is a hilarious 90-minute improv comedy match where two teams of professional players compete for laughs and points while a referee keeps things moving and calls fouls. Players create comedy scenes, songs and games right on the spot based on your suggestions. You choose the winner and the show is never the same twice. It’s fun, fast-paced, smart comedy for all ages! ComedySportz® is in 26+ cities nationwide, and in Europe. We’ve been bringing the funny around the world since 1984.