The Grand’s Friday lineup this May 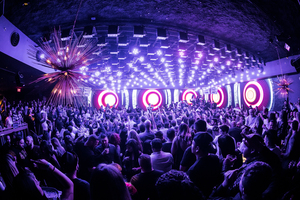 Big Night Entertainment Group’s new lineup for The Grand’s Friday nights during May is unmatched. From international sensations to local superstars, these DJs have exactly what it takes to make it a big night. Additionally, get ready to dance the night away on Sunday, May 12 with FISHER at The Grand.

The well-known DJ, songwriter, record producer and remixer, Jonas Blue, is ready to turn up the volume and play some of his dance and pop music hits. Jonas Blue kicked off his successful career with the remix of the well-known Tracy Chapman hit “Fast Car,” and since then, he’s proven himself to be an international superstar.

Timmy Trumpet, Australian musician, DJ and record producer, is known for implementing jazz elements into his globally renowned dance music. After performing at top festivals and clubs, Timmy Trumpet is sure to bring the energy and an unforgettable performance to The Grand this May.

This New York City native is ready to bring the dancing to The Grand with his electronic dance music. Zack Martino, known for his incredible remixes and crowd presence, will bring an unforgettable experience with his hits like “Lonely for You” this May.

Swedish DJ and record producer, Alesso, is constantly on the rise with hit after hit, including “Heroes” and “Let Me Go.” This international superstar has performed to crowds in Germany to Las Vegas and everywhere in between. He is always mixing up genres by working with multiple artists such as Tove Lo, Calvin Harris, Hailee Steinfeld and Usher.

These Australian brothers, Matt and Chris, are known for blending the genres of house and electronic music. Their newest release, “WOLF” has gotten international attention and is sure to be an epic performance this May at The Grand.

FISHER, also known as Paul Nicholas Fisher, is a Grammy award-nominated Australian music producer. He previously was one half of DJ Duo Cut Snake, but later went solo and began releasing tracks under his stage name FISHER. FISHER is best known for his solo single “Losing It”. “Losing It” made the top 50 on Billboards Hot Dance/Electronic Songs, Dance/Mix Show Airplay and Dance Club Songs, becoming his first number one in the United States and his first Grammy nomination for Best Dance Recording.