The Classical Mystery Tour: A Tribute to the Beatles 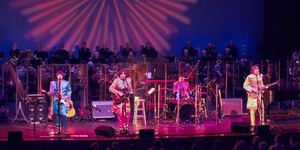 Since its initial performance at the Orange County Performing Arts Center (now renamed Segerstrom Center for the Arts) in 1996, Classical Mystery Tour has become the #1 Symphony Pops attraction over the last decade. The group has been performing consistently for more than 20 years with more than 100 orchestras in the US, Canada, Europe, Asia, and Australia. The group played to packed houses at the Sydney Opera House, and has performed with America’s most prestigious orchestras: The Cleveland Orchestra, The Boston Pops, The Philadelphia Orchestra, The San Francisco Symphony, among many others. www.classicalmysterytour.com

About the Symphony Pro Musica

On October 22, 1983, renowned conductor, cellist, and educator Mark Churchill, together with a group of dedicated and talented musicians, launched Symphony Pro Musica with its first concert at Hudson High School. Several original SPM musicians are still active members of the orchestra thirty-five years later—testament to the allure of MetroWest’s pre¬eminent volunteer symphonic group. At the time, The Worcester Telegram stated that though SPM was in its inaugural season, “It has shown itself to be one of the best orchestras on the local scene.” This is truer today than ever.

Symphony Pro Musica is composed of approximately 70 volunteer musicians drawn from the local communities and beyond. Prospective SPM orchestra members audition for their parts—the bar is set high, and the repertoire reflects this. In addition to popular classical favorites, the orchestra performs less frequently played and challenging pieces, usu¬ally thematically organized. SPM has performed with choruses, opera companies, and ballet companies—the organization continues to challenge itself with meaningful collaborations. Throughout its history, SPM has showcased established artists and gifted young soloists under the guidance of Maestro Churchill. These soloists often visit local schools, offering Masterclasses and informal lectures to students.