The Art of Banksy Boston 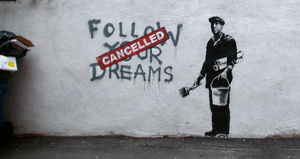 This globally acclaimed showcase features original and authenticated works associated with, arguably, the most intriguing and talked-about artist in modern history. On display are prints, canvasses, screenprints, sculptures, unique works and limited-edition pieces mainly dated between the years 1997 to 2008, the period which resulted in Banksy’s most recognisable and well-known works.

The exhibit features iconic works such as ‘Girl and Balloon’, ‘Flower Thrower’ and ‘Rude Copper’ alongside some of Banksy’s lesser known masterpieces. Banksy is most infamous for his outdoor art which can be found in streets all around the world. Banksy’s indoor pieces - original and unique works on canvas, wood and paper - have been less exposed and are also on display at this exhibition.

Banksy, whose identity remains a mystery is considered one of the world’s top political artists. In 2010, Time magazine selected the British artist for its list of the worlds’ 100 most influential people among the company of Barack Obama, Steve Jobs and Lady Gaga. Over the years, Banksy has carried out a considerable number of ‘pranks’. One of the biggest stories in the art world recently was Banksy having his “Girl with Balloon” painting go through the shredder just moments after the work was sold for nearly $1.4 million at auction.