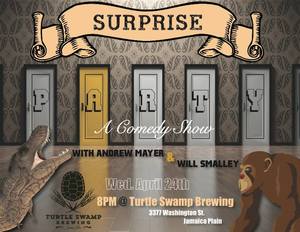 Comedians (and best friends!) Andrew Mayer and Will Smalley are back with a brand new comedy show that will surprise everyone including the hosts. Each month one of these silly-talking host put together a "Surprise Party" in the form of a comedy show to wow the audience and each other. This month, on the eve of Andrew's actual birthday, Will looks to put together a show/party/extravaganza that will be the event of decade! Expect tom-foolery, comedy, cakes, magic, general chaos, amazing beer from Turtle Swamp Brewing and a butt-load of surprises (planned and unplanned!) So come turn out the lights with us and wait in anticipation for the best dum-dum comedy show Surprise Party!
Surprise Party debuts Wednesday April 24th @ 8PM!