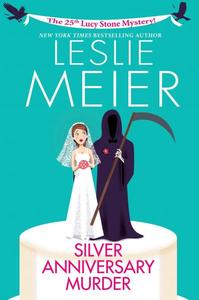 Much has happened since Leslie Meier first introduced her beloved sleuth Lucy Stone with Mistletoe Murder. Many holidays and bake sales have come and gone, Lucy’s children have all grown up. But even after twenty-four books into the bestselling series, murder is never out of the picture . . .

As Tinker’s Cove, Maine, buzzes over a town-wide silver wedding anniversary bash, Lucy is reminded of her nuptials and ponders the whereabouts of Beth Gerard, her strong-willed maid of honor. Lucy never would have made it down the aisle without Beth’s help, and although the two friends lost touch over the years, she decides to reach out. It only takes one phone call for Lucy to realize that a reunion will happen sooner than later—at Beth’s funeral.

Beth, who was in the process of finalizing her fourth divorce, had a reputation for living on the edge—but no one can believe she would jump off a penthouse terrace in New York City. The more Lucy learns about Beth’s former husbands, the more she suspects one of them committed murder.

Summoning her friend’s impulsive spirit, Lucy vows to scour New York from the Bronx to the Brooklyn Bridge in search of the killer. With each ex dodgier than the last, it’s not long before Lucy’s investigation leads her to a desperate criminal who will do anything to get away—even if it means silencing another victim . . .

Leslie Meier is the acclaimed author of over twenty Lucy Stone mysteries and has also written for Ellery Queen’s Mystery Magazine. She is currently at work on the next Lucy Stone mystery. Readers can visit her website at lesliemeierbooks.com.