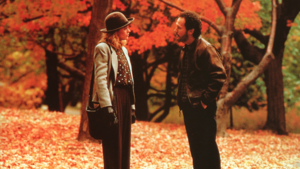 Billy Crystal and Meg Ryan effortlessly play the titular characters, crossing paths and becoming friends as they both try and fail to find love in New York City. But as that friendship blossoms into something more, they find themselves asking the eternal question: can a man and a woman really be friends, or does the sex part always get in the way?

Aisha Harris is a co-host and reporter for the NPR podcast Pop Culture Happy Hour. From 2012 to 2018, she covered culture for Slate Magazine as a staff writer, editor and the host of the film and TV podcast Represent, where she wrote about everything from the history of self-care to Dolly Parton's (formerly Dixie) Stampede and interviewed creators like Barry Jenkins and Greta Gerwig. She joined The New York Times in 2018 as the assistant TV editor on the Culture Desk and produced a variety of stories, including a feature Q&A with the Exonerated Five and a deep dive into the emotional climax of the Pixar movie Coco. And in 2019, she moved to the Opinion Desk in the role of culture editor, where she wrote and edited pieces at the intersection of the arts, society, and politics.