Saving Sea Turtles in Ghana, One Life at a Time 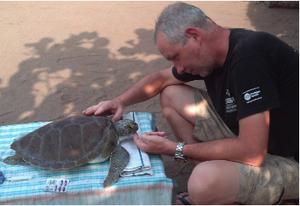 Seven years ago in Ghana, John Flynn and his colleague, Neil Davis, witnessed firsthand the rampant poaching of nesting sea turtles and their eggs. They contacted local village chiefs in the western part of the country and recruited a team of community volunteers to begin nightly beach patrols to deter poachers. Within a few years, thousands of turtle eggs and nesting turtles were saved. Flynn founded the group, Wildseas, which began its work on sea turtle nesting beaches and then expanded to solving the problem of sea turtles getting entangled in offshore fishing nets. Volunteers worked with fishermen to safely release turtles caught in the nets, and nearly 1,000 turtles have been saved since 2012.
John Flynn is co-founder and conservation director of Wildseas. He is also a fellow with the New England Aquarium Marine Conservation Action Fund which offers micro-grants for conservation work worldwide. Flynn holds a diploma in marine biology with a particular interest in sea turtles, sharks, overfishing, and illegal fisheries. He founded Wildseas six years ago and now works full time for the sea turtle and shark conservation organization. His turtle projects have taken him to Europe, India, Thailand, Africa, and Ireland.