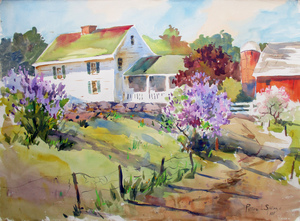 For the month of November and December, South Street Gallery, South Shore’s premier fine art gallery supporting area artists, will honor the work of the late Peter Spataro, a well-known artist from this area, who was also a teacher in the Town of Hingham, and whose death had a profound impact on the artistic community.

In honor of Peter's passing in the fall four years ago, Peter's son Matt Spataro will donate 30% of all November & December sales to Cancer Research Institute. Please view Peter's works on the Gallery’s website and in person at South Street Gallery. Starting on Thanksgiving, the open hours will also include Sundays from 12 to 5pm.

Spataro’s work reflects not only Hingham area landscapes, but also scenes from Florida, as he lived for some time in Miami. He was primarily an outdoor painter, whose passion for color and light is evident in all of his paintings, which were painted on location – which he loved to do with natural light and color. He had studied with many famous master painters but credited five years of study with Edward A. Whitney as the single most influential factor in becoming a serious artist. His original work is represented in galleries from Maine to Florida.

Spataro’s work appeared in two issues of Better Homes and Gardens and two issues of the American Artist. Spataro was featured in the book “The Best of Watercolor” by Betty Lou Schlemm and Thomas Nicholas Sr. His work has been purchased by the first National Bank of Boston of Boston, Town Offices, medical centers, hotels and restaurants as well as extensively through private sales. And, he was selected by Fairchild Tropical Gardens in Miami and The Ritz Carleton in Palm Beach to paint views of their world famous locations.
Spataro taught and directed the art program at the Massachusetts Department of Correction for over seven years. He additionally had done a number of one-man shows in places including City Hall Boston, Symphony Hall, The Prudential Building, South Shore Conservatory of Music, and many art associations throughout Massachusetts.
Peter had a connection with many of the artists South Street Gallery knows and represents, he painted with many of them. While Peter’s talent extends beyond watercolors to oil and acrylics, it is his watercolors that are available for purchase here. These paintings represent the remainder of Peter’s estate that is available to the public. The landscapes show places from Massachusetts including Hingham, Hanson, Hanover, Gloucester, Rockport, Sutton, Sterling, Barre, Upton, and Millbury. There are landscapes from Vermont, and Maine (Monhegan Island, Port Clyde, Damariscotta); as well as from Miami and Naples FL. All were painted between 1986 and 2006. Each painting has a short description on the back, written by the artists about the location, as well as who he was with at the time. Some of the descriptions mention specific artists, such as Charles Movalli, John Loughlin, Bernard Corey, Michael Graves and Robert Duffy, whose works are represented by South Street Gallery. The notes from the artist provide further insight into the painting, with some watercolor messages saying that the painting won a prize, and another says it was used as a demonstration painting for a Hingham class. One of Spataro’s paintings on display was featured in a magazine called Watercolor91, an American Artist Publication in 1991.
Spataro was born in Granville, NY. He met his wife in New York, and they moved to MA together, and lived in Hanover. He was an art teacher at the Plymouth River School and East School, in the early 1990s.
He was an award winning member of the New England Watercolor Society, Allied Artists of America Art Association, North Shore Art Association, Hudson Valley Art Association, and Salmagundi Club. He studied with many nationally known artists but attributed his extensive study with Edgar A Whitney as the single most influential factor in his decision to become a serious artist. One of the artists whose work has been shown at South Street Gallery is Charles Movalli, who was a good friend of Peter’s.
Spataro exhibited in many national shows including American Watercolor Society. Between 1995 and 1998 he won the Gold Medal Award at North Shore Art Association and first prize at the open show at Palm Beach Watercolor Society.