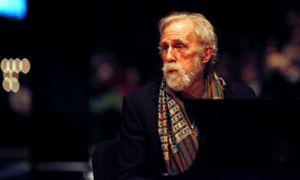 In a career that now spans five decades, pianist Ran Blake has created a unique niche in improvised music as an artist and educator. With a characteristic mix of spontaneous solos, modern classical tonalities, the great American blues and gospel traditions, and themes from classic Film Noir, Blake's singular sound has earned a dedicated following all over the world. His dual musical legacy includes more than 40 albums on some of the world's finest jazz labels, as well as nearly 40 years as a groundbreaking educator at Boston's New England Conservatory. His premiere recording, The Newest Sound Around, won the 1963 RCA Album First Prize in Germany and the 1980 Prix Billie Holiday and is included in the Académie du Jazz. Blake frequently incorporates melodies inspired by dreams and film noir into his compositions. Recent releases include 2017's Town and Country (with fellow NEC faculty member Dominique Eade), Indian Winter (a 2005 album with guitarist/NEC alumnus David Fabris) and All That Is Tied (a 2006 album of solo piano that appeared on numerous jazz publications' year-end "Best of" lists, including The Village Voice and Downbeat magazine.) Downbeat says, "Ran Blake is so hip it hurts ... a pianist who can make you laugh at his dry humor one second and wring a tear the next." www.ranblake.com
The music of guitarist Dave "Knife" Fabris has been steeped deeply in an eclectic pool of influences. These influences are evident in the variety of performances and ensembles to his credit. His newest CD, Lettuce Prey, seamlessly travels between the worlds of Jazz, Rock, and Contemporary Classical music.