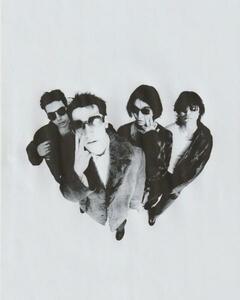 Quarters of Change(Opens in a new window) is the Lower East Side quartet leading the charge on New York City's rock resurgence and redefining what it means to be a rock star. You may have recently discovered them as the end-credit performers on Netflix's acclaimed RACE docu-series, but their origins go back much farther.

Composed of Ben Acker, Attila Anrather, Jasper Harris, and Ben Roter, Quarters of Change started in 2017 as a high school cover band, performing iconic rock songs of the '90s and '00s. It wasn't until their junior year that they began writing original material, pulling influence from groups like the Strokes and Rage Against the Machine, and creating their own original sound. Within a year, the band had signed a deal with Warner/300 Entertainment, released streaming favorites like "Kiwi," and played sold out shows at renown venues like Bowery Ballroom and Webster Hall.

Now, armed with a record deal and an undeniable slew of songs, Quarters of Change is poised to be alternative rock's next big thing. Keep an eye out for their self-written debut LP, Into the Rift, with contributions from legendary producer Tom Lord-Alge, coming Spring 2022.