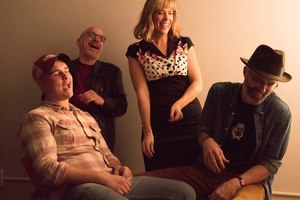 When artist/psychologist David Keevil’s son Griffin was born in 1999, David decided to get back to making music – he took up guitar, and started writing and singing songs. Meanwhile, operatic diva Wendy Parker started writing songs as well, while she hankered to return to her first love: singing rock and roll. In 2015 all this deciding, hankering, writing, singing and birthing came to a head as multi-intrumentalist John Germanotta grabbed his bass and joined his old friend David, singer Wendy, and drummer Griffin in a new alt/indie/rock band: Parkville Zoo.

Why go to the Zoo? Because it’s so much fun! And because it’s a wonderful way of sharing things that matter for all of us movers and shakers, feelers and thinkers. With David, Wendy, John, and Griffin as its head, heart, guts and hips, Parkville Zoo erupts with original songs that are edgy, philosophical, satirical and desperately hopeful. Rich three-part harmonies jump and swing from a structure of rhythmic wood and steel, while lyrics bite your ear one moment, then nuzzle your nose the next. Parkville Zoo knows there’s room for at least one more band in the world that takes fun seriously, asks little questions about big things, plays its heart out, and gives its audience a big hug at the end.