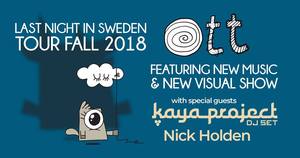 Ott returns to North America for his 'Last Night In Sweden' tour, featuring NEW MUSIC and a NEW VISUAL SHOW! The mastermind behind "Blumenkraft" will be bringing his pals Kaya Project (doing a special DJ set) and Nick Holden from the UK for a truly unique multi-sensory experience on September 20 at Middle East Restaurant and Nightclub!

Listen to Ott on Spotify: https://open.spotify.com/artist/1F102kNzMqsmOpF7AfFmm5?si=KbppWOi3RHCnTExpxRgaSA

Ott has been messing about with sound boxes every day for as long as he can remember. Having spent the '90s flitting between his day-job as a freelance studio engineer and long weekends under the stars at psychedelic trance parties, the obvious next step, as the millennium turned, was to create music of his own from the jumble of sounds which filled his head. After teaming up with Twisted Records, 2002 saw the release of the acclaimed 'Hallucinogen In Dub' album, followed in short order by his first solo effort, 'Blumenkraft'in 2003. 2008 saw the release of 'Skylon' and in 2011 the album 'Mir' was born. A pattern has formed: every four years or so an album coalesces from the chaos, heads out into the world and takes on a life of its own. 'Fairchild' was released in 2015, and fall 2018 will see the release of his heavily anticipated fifth studio album.