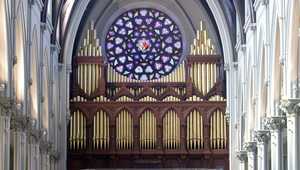 
BOSTON — The Cathedral of the Holy Cross celebrates the 145th years since the
dedication of its principal organ, the 101-rank E. & G. G. Hook & Hastings opus 801, on
February 23, 1876.To honor the instrument’s birthday, several of Boston’s notable organists will perform variety of works by on the historic pipe organ of 5,318 pipes.

Performers include Dr. Bridgette Wargovich, Corpus Christi Parish, Leo Abbott, Cathedral Director Emeritus, Maks Adach, Associate Director of St. Paul’s Choir School, John Black, Director of Music, Greenwood Church, and Richard J. Clark, Director of Music of the Cathedral of the Holy Cross with Richard Kelley, trumpet.
Works by Dupré, Vierne, Pott, Reger, and Clark
The concert will allow a live audience in accordance with Massachusetts regulations. To come in person, you must wear a mask, and you must buy tickets and register here:
Tickets are $50 | $25 Seniors & Students available online and at the door:
https://www.eventbrite.com/e/cathedral-organ-145th-anniversary-fundraiser-tickets-152755260095

Children 17 and under are free!

You may also make a donation of any amount larger to the Cathedral Organ Restoration Fund. https://holycrossboston.churchgiving.com/Organ

The concert will also be steamed live on https://www.facebook.com/rcabcathedral

At 364 feet long, ninety feet wide, and 120 feet high, with a seating
capacity of 1,700, Holy Cross Cathedral is New England’s largest church.
Dedicated in December 1875, it was built of locally quarried Roxbury
puddingstone and Quincy granite to designs of noted ecclesiastical
architect Patrick C. Keely. The advent of cast-iron construction
permitted exceptionally slender nave columns supporting the largest
wooden vault of its time. An unfashionably remote location—the former
site of the town gallows—betrays Anglo-Saxon Protestant Boston’s
ambivalence toward waves of “foreign” immigrants, for whom the new
cathedral’s completion after nine years of construction was a signal
achievement.

The 1875 Hook & Hastings wasn’t the largest organ built in the United
States during the nineteenth century, but at seventy voices and 101
ranks it is the biggest to have survived unscathed. Built in the early
years after Francis Hastings assumed control of the firm from founding
brothers Elias and George Hook, Holy Cross’s instrument was the first of
several organs intended to generate considerable power in vast spaces.
Fully a quarter of the organ’s resources—twenty-seven ranks—are vested
in a blazing Great chorus topped by a Trumpet and Clarion imported from
France. With a five-rank cornet in every department, many registers of
pure tin, and a ten-inch pressure Tuba built and voiced in the Hook &
Hastings shop, here was Hastings’ manifesto on post-Civil War tonal
heroism.

Like the neighborhood itself, Opus 801 languished into the twentieth
century and into the shadows of newer, “better” organs with electric
action and French horns. In the 1920s, the organ was casually
electrified and fitted with a second-hand theatre organ console. The
Hook revival of the 1960s and ’70s brought renewed attention, however.
More recently, under the tireless banner-waving of Cathedral organist
Leo Abbott, the instrument is seeing happier days. In 2003, Andover
Organ Company supplied a modern console patterned after the original,
and in the past decade has undertaken select restoration as funding has
become available.

In 2015, the Cathedral closed for interior and exterior renovation. The
Church was reopened on Palm Sunday, 2019. The biggest change, musically,
was the removal of carpeting and sound-dampening material. The new
acoustic is glorious, with a 5 second reverberation.

The Organ was rededicated with a concert by Leo Abbot, now Organist
Emeritus, on September 15, 2019