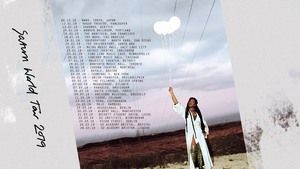 Born in Nottingham, England and raised in East London, Neo Jessica Joshua began playing piano in early childhood and, as a young teenager, started taking singing seriously. She attended the Guildhall School of Music and Drama to study vocal jazz and upon graduation spent a few years teaching singing in South London. Joshua wrote and recorded as a member of a vocal group, the Boxettes, performed at Glastonbury Festival with Shlomo's Vocal Orchestra, and took on some background vocal work before made her first moves as a solo artist. Material uploaded to SoundCloud in 2014 attracted label interest, but Joshua opted to establish her own outlet, Little Tokyo, with So Good, an EP released that October with an A.K. Paul collaboration as its title and lead track. In May 2015, just after Mura Masa had released the Joshua collaboration "Firefly," the second Nao EP, titled February 15, was available. Though the sleek, progressive, and occasionally dark material prompted easy comparisons to contemporary vocalists like FKA Twigs and Kelela, Joshua's voice, simultaneously youthful and wise-sounding, often recalled that of a young Deniece Williams. Joshua within a few months performed at Glastonbury -- this time with a band of her own -- contributed background vocals to Kwabs' "Make You Mine," and was featured on Disclosure's Caracal as the co-writer and vocalist on "Superego." By the end of the year, she was nominated for a MOBO award in the category of Best Newcomer, and was fully supported in her native U.K. by major-label RCA, who released the single "Bad Blood," a collaboration with Daniel Traynor (aka Grades).

In 2016, Joshua made a return to Glastonbury Festival and that July released her debut album, For All We Know. It debuted at number 17 on the U.K. chart and led to numerous accolades for the singer, who was shortlisted for BBC's annual Sound Of... poll and nominated for a Brit award in the category of Best British Female Solo Artist. Joshua's 2017 was comparatively quiet release-wise, limited to For All We Know: The Remixes and the crisp single "Nostalgia." Additionally, the deep album cut "Feels Like" was licensed for the season two soundtrack of the television series Insecure. A batch of singles that included the SiR collaboration "Make It Out Alive" (licensed for Insecure's third season), as well as a cover of Teena Marie's "I Need Your Lovin'" (for the Uncle Drew soundtrack) and an appearance on Chic's It's About Time, preceded the October 2018 release of Saturn, the second Nao full-length.