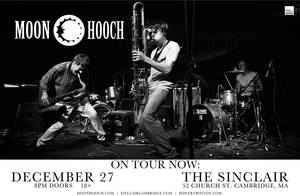 Moon Hooch captured the imaginations of thousands with its infamous stints busking on subway platforms and elsewhere in New York City: two sax players and a drummer whipping up furious, impromptu raves. This happened with such regularity at the Bedford Ave station in Williamsburg, Brooklyn, that the band was banned from playing there by the NYPD. The trio's subsequent tours with They Might Be Giants, Lotus, and Galactic as well as on their own have only broadened the band's appeal. Wherever Moon Hooch plays, a dance party soon follows.

Hornblow Recordings and Palmetto Records are now proud to release Moon Hooch's second album, This Is Cave Music, on Sept 16, 2014. The title refers to the term Moon Hooch coined to describe their unique sound: like house music, but more primitive and jagged and raw. Horn players Mike Wilbur and Wenzl McGowen do this by utilizing unique tonguing methods, or adding objects — cardboard or PVC tubes, traffic cones, whatever's handy — to the bells of their horns to alter their sound. Not to be outdone, drummer James Muschler gets swelling, shimmering sounds from his cymbals, and covers the head of his snare with a stack of splash cymbals to emulate the sound of a Roland TR-808 drum machine's clap.

Wilbur was raised in Massachusetts, and Muschler in Ohio; McGowen grew up in several different European countries. The three met while students at The New School for Jazz and Contemporary Music in New York City, and they found in each other a common work ethic and holistic philosophy. Moon Hooch are committed to environmental and agricultural sustainability, and they're such fans of Michael Pollan's groundbreaking The Omnivore's Dilemma that they visited the farm that Pollan profiled in the book, Polyface Farms, in rural Virginia while on tour in 2013. Moon Hooch literally caused a stampede when they set up and played their song "Tubes" in the pasture as cattle swirled in the background. (The trio lived to tell the tale, and the "Cattle Dance Party" video has been viewed nearly 200,000 times and counting on YouTube.) Muschler also maintains a blog called Cooking in the Cave (cookinginthecave.net) where he chronicles the band's vegan tour-van culinary endeavors — it's amazing what these guys can do with a hot plate.

While their self-titled first album, which cracked the top 10 of Billboard's Jazz Albums chart, approximated the band's acoustic approach to dance music, This Is Cave Music takes their cave music hybrid further into electronic and pop music realms with synthesizers, post-production work, and even singing added to the mix. "We aren't trying to do it for the sake of reaching a wider audience," McGowen points out. "We are doing it because it's where our passion has evolved to. This album is a culmination of that."

The source material was, like the first album, mostly recorded at The Bunker Studio in Brooklyn by Jacob Bergson, with McGowen on contrabass clarinet and baritone saxophone, Wilbur on tenor saxophone and vocals, and Muschler anchoring things on percussion. Everyone was involved in the digital additions. "We spent a lot of time on tour producing the set, running all the live sound through Ableton software, and manipulating the studio sound on our computer while in the car," Wilbur explains. "We could just pass the computer around and work on it for hours."

Things turn to straight up new wave on "Mountain Song" with Wilbur's dreamy vocals alongside icy synthesizers and machine-like drumbeats with contrabass clarinet filling the backdrop. Celebrating the band's love of Depeche Mode, "Rainy Day" is a classic synth-pop love song where Wilbur actually recorded his vocals in the van after a gig in North Carolina while on tour with Mike Doughty.

The circular sounding "St. Louis" is the final of three synth-pop road tunes written by the horn players. (The tour stop that gave the song its name was also memorable because Muschler cut his hand wide open while making dinner backstage. The drummer played that show in St. Louis and many that followed with one hand.) This is the band at its most anthemic with Wilbur on vocals and sax, McGowen on contrabass clarinet and a now-healed Muschler on drums.

"5-Sax Piece" uses multiple sax overdubs from Wilbur to create a polytonal, synthesizer-like backdrop, while elsewhere, McGowen's Electronic Wind Instrument (EWI) synthesizer can be heard at various times, most notably on the track that bears its name.

The album closes with a suite of songs that fit together so well that they are usually a closing sequence of the band's live set. Written by Muschler, the first chord of "Bari 3" features the lowest note of both the baritone and tenor saxophone and moves on from there to more traditional Moon Hooch fare. Sliding in behind it is the trance music-like "Why Not," which was written by Wilbur. The idea here was to write a two-note melody and see how far the band could take it, which is quite far into minimalist house music. "Contra Dubstep" follows with Wilbur singing, rapping even playing slide whistle.

The finale is one of the band's most popular and infamous songs. A live YouTube video for "Milk and Waffles," finds the band playing in the middle of a freeway bridge; while no cars ever pass, Muschler was so overwhelmed by the moment that he closed the song by taking off his clothes, trashing his drum kit and walking away.

Listening to this music, it's easy to become emotionally invested. It may not always prompt you to strip off your clothes, but the emotional impact on both the musicians and their fans is visceral and undeniable.