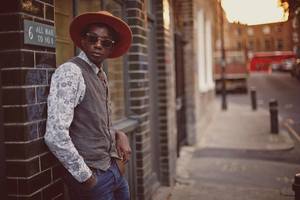 Salami was fostered when he was two months old, growing up between his birth mother in South London and his foster family in Broadstairs, on the English coast. Most of his teens and early 20s were spent on the move, rarely settling in one place for more than few months. This lifestyle provided him with a unique insight about life in the city, something he later used to fuel his songwriting—lyrically and conceptually.

Salami's love for music began when he first heard Bob Dylan on the radio, leading him to explore more blues and folk music and inspiring him to write his own songs. He could not afford his own instrument and wasn't introduced to one until he was given a guitar for his 21st birthday. After three months of soul-searching, tapping into different creative avenues, and sleeping rough, Salami eventually wrote his first few songs and set out to land some gigs. Success came knocking after relentless gigging, starting with a tour-support slot for Lianne La Havas in 2012.