'In the Heat of the Night' 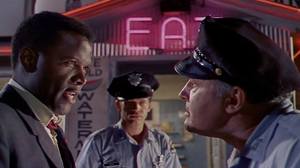 In Norman Jewison’s explosive, racially-charged film, Sidney Poitier stars as Virgil Tibbs, Philly’s #1 homicide detective who finds himself at odds with everyone from cops to killers when he gets swept up in a murder investigation in small town Mississippi. Rod Steiger co-stars as the town’s racist sheriff who begrudgingly admits that he could use the help of this big-city ‘boy.’

With staggeringly powerful performances by both Poitier and Steiger, IN THE HEAT OF THE NIGHT was a monster hit upon its release and won 5 Oscars including Best Picture (though, tellingly, Poitier wasn’t even nominated). It remains, to this day, a superlative film with remarkable talent both in front of and behind the camera – shot by Haskell Wexler, edited by Hal Ashby, music by Quincy Jones – and is not to be missed on the big screen in this new 50th anniversary restoration.