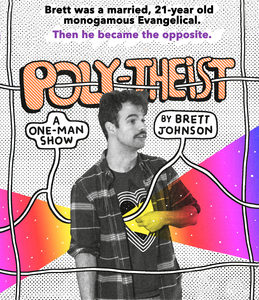 Brett was a married, 21-year old, monogamous Evangelical.
Then he became the opposite.
POLY-THEIST is stand-up Brett Johnson's new, true one-man show about Jesus, non-monogamy and KFC/Taco Bells.

It's been featured in the Hartford Courant and The Boston Globe, sold-out runs in Boston, Cambridge and New York, been performed in Chicago, Connecticut, Portland and is a Edinburgh Fringe 2019 selection.

Brett Johnson is a Boston-based stand-up comic and actor who grew up in Albany, New York and spent three years as a teenager in Nairobi, Kenya. His sly, cerebral joke writing and animated storytelling combine for an act that’s as entertaining as it is confessional. Brett is known for his willingness to explore delicate subjects and expressive physicality, which he developed as a trained actor and improviser.

He's performed in festivals across North America and the UK, co-created the award-winning comedy video team Brainfox and has never run a marathon.
http://brettswebpage.online