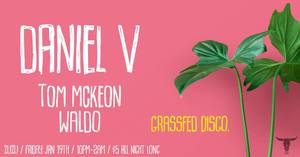 DANIEL V’s sound is immediately likeable and all his own. Cute beats, fun voices, droll noises, and a fierce proclamation of “house music forever” tells quite a story at full podcast length with never a dull or run-of-the-mill moment,. “I don’t want to be like everybody else,” he says. “Why do that ? I’ll take my chances being different.”

Different his sound definitely is, and developed over more than 15
years, since he first decided that house music and DJ-ing were what he wanted to do. DANIEL V was born in Medellin, Colombia, where he was a young pianist and where “the radio stations played house music, we were all exposed to it; and everybody liked it.” This was very different from music radio in the U.S. , as V found when his family moved to the Boston area after his 13th birthday. “Here, not one of my friends knew what house music was,” he remembers. “And there I was, already listening to it; to Donald Glaude, Junior Vasquez, Murk Boys, I loved it all.

By the time that Valencia reached college age – 2003 – he was an
accomplished Boston-area DJ and house music lover, buying his 12-inch vinyl – “yes, I was still doing vinyl,” he says – at Boston Beast and Satellite, including disks especially ordered for him by Boston Beat’s owner. He was DJ-ing now at The Palace, and at Club Matrix, although “still learning,” as he says it, was given a chance to open for major DJ Bad Boy Bill at Avalon, then Boston’s biggest and best known dance club. “I already knew Bill from his BANGIN THE BOX cd,” says Valencia, “and I was so into tribal. It was all about tribal then, and to open in tribal style for Bill was a dream come true.” Bad Boy Bill remained a major influence on Valencia from then on; indeed even in 2009 Valencia and Bill played together at Boston’s famed Underbar club. Still, the stint at Avalon led Valencia to a world of other influences, including Chicago house music after a gig at Providence’s legendary Therapy club. By 2005, and onward, Valencia had secured residencies” Valencia found himself in demand now not only in Boston. By 2006 he
was DJ-ing in Miami, Chicago, Los Angeles, and overseas.