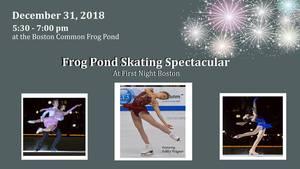 Join The Skating Club of Boston at The Boston Common Frog Pond for a FREE figure skating show featuring national and international competitive figure skaters, soloists, groups, wee skaters, and Team Excel Synchronized Skating and Theatre On Ice of Boston teams. Ring in the New Year with friends and family at a fantastic show!

Immediately following the show, the Mugar Family Fireworks will take place on Boston Common at 7:00pm.

Note: The Frog Pond ice rink will close at 4pm on the day of the show for production setup and will remain closed after the show.