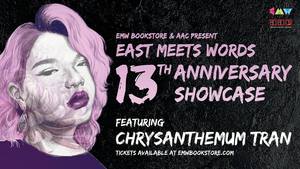 JOIN US IN BUILDING BRIDGES

Let us know you are coming!
emwbookstore.salsalabs.org/eastmeetswords13thanniversary

On March 9, 2018, EMW Community Space and Northeastern University's Asian American Center are partnering to present the East Meets Words 13th Anniversary Showcase Featuring Chrysanthemum Tran. Over the last thirteen years, we've hosted over 156 open mics; we've featured at least 156 APIA artists and artist groups, as well as many more narratives during our open mic series, solidifying us as the longest running APIA open mic series on the East Coast. Join us in celebrating these last thirteen years as we continue to build strength among our peers. This year's showcase will be the culmination of our efforts to build power among Asian Pacific Islander American, LGBTQIA, and artist of color communities; our showcase will be highlighting various community organizations which have helped build our community as well as the artists who have been born from it.

/// About Our Feature ///
Chrysanthemum Tran is a queer & transgender Vietnamese American poet, performer & teaching artist based in Providence, RI. In 2016, she became the first transfeminine finalist for the Women of the World Poetry Slam. A Pink Door Fellow, Chrysanthemum also won the 2016 Rustbelt Poetry Slam (with an all-Asian American team aptly named Michael Derrick Hudson) & the 2017 FEMS Poetry Slam. She is the current lead teaching artist for the Providence Poetry Slam youth team. At 19, Chrysanthemum had her first feature ever at East Meets Words (along with the hauntingly talented Sonja John).

At this curated open mic, participants can sign up to sing, spit, dance, play music, or share a story. Everyone is welcome. The space is especially appreciative of work that challenges stereotypes and amplifies marginalized voices. Participants does not need to be of Asian or Pacific Islander decent to perform, but our space will prioritize those voices. Time is set aside at each open mic for community announcements, meant to raise awareness about social justice issues in the greater Boston area.

Each month, we also feature an Asian / Pacific Islander artist or group, who will perform a full-length set after the open mic portion of the evening. Past features have ranged from nationally known artists such as Beau Sia and Kelly Tsai to local creatives like you and me.

We strive to create a safer space and a platform for artists and non-artists to perform work of all stages. Everyone is welcome to attend and signup on the open mic. The space is especially appreciative of work that challenges stereotypes and amplifies marginalized voices - prioritizing API performers. Time is set aside at each open mic for community announcements, meant to raise awareness about social justice issues in the greater Boston area.

Please email programs@emwbookstore.com or call the bookstore at 857-600-1244 if you have any further questions, concerns, or accessibility details that haven’t already been addressed.

Would like to donate to our organization? Make a contribution at www.emwbookstore.com/donate

EMW Community Space, fondly known as EMW Bookstore, is a community-oriented space and resource for people from marginalized identities to pursue our creative visions.

Many thanks to Fenway Health for supporting our event with a sponsorship!