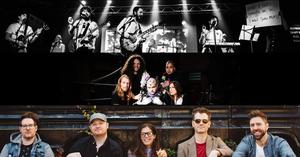 Doom Lover
Though leaning hard on the alt-rock button, Doom Lover is on any given night at least two things at once. Driven by one intention, but many methods, Doom Lover craft haunted rocks songs delivered with equal parts aplomb and tenderness. Songs filled with soaring hooks, noisy freakouts, plenty of specters and a stage show complete with three part harmonies, lots of stuff falling over and the occasional puppet show or choreographed dance routine.

Sidewalk Driver
Sidewalk Driver is high-energy, highly-infectious, hook-driven, Rock with a capital ‘R.’ The sound is modern but the heart of the band seems to be more in line with 1970s rock culture… the Bowies and the Belushis of the world. Lead singer Tad McKitterick’s voice has power and clarity, is expressive without falling off the pitch and is forceful without losing subtle moments. Guitarists Kate Murdoch and Jared Egan seamlessly weave crunchy rhythms with soaring solos while bassist Jonn Smith and drummer A.J. Locke hold down the bottom end. The songs always come with some odd bent but not one that repels; rather, they welcome you to join in the celebration like a carnival barker hyping a freak show.

More info and tickets at http://bit.ly/30o3iRf