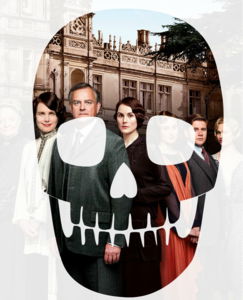 Rodney Raleigh, the Earl of Grantham and Lord of Downton Abbey, has invited you to a grand dinner party on his estate. The tables are set, the lamps are lit (none of that new-fangled electricity here, thank you very much), and the guests have all arrived.

Everyone who's anyone is here--but where is the host?

When Lord Raleigh is found dead in his bedchamber, it soon becomes clear that there's a murderer at Downton Abbey. But who? It seems that everyone in the house has secrets of their own. Was it the new heir presumptive? The scheming ladies' maid? One of his beloved daughters? Did the butler do it?

It's up to you, and the other Downton dinner guests, to find the murderer in your midst.
Dress in your best Edwardian attire and, as your assigend character, unravel the complicated relationships of the other guests and keep your own secrets safe as you work out who murdered the Earl--and who might be next. Posh accents. Period clothes. Pretending to be Dame Maggie Smith. What more could you want from an evening?