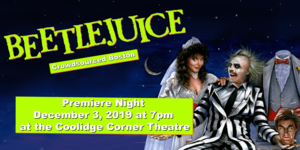 BIG will be screening the third annual premiere of Crowdsourced Boston’s remake of the fan favorite film, Beetlejuice, at the Coolidge Corner Theatre! We warmly welcome the entire Brookline and surrounding communities to attend.

Crowdsourced Boston is a collaborative community arts project in which several local public access media centers -- including Ashland Community Media, Billerica Access Television, Arlington Community Media, and Belmont Media Center -- and teams from the greater Boston area create an original, full-length crowdsourced film. This is the third year in a row that Crowdsourced Boston has teamed up with community centers in the greater Boston area on this collaborative project. This year, each team produced their own one to four minute long scene from Beetlejuice, which have been edited together to recreate the feature film, line for line and with similar shots.

Come watch a truly creative re-make of this classic, cheer on your local filmmakers, and celebrate community arts at this event!

There will be a costume contest at the event. Come in your Beetlejuice best! First and second place will receive a free BIG membership for a year and a free class of their choice.