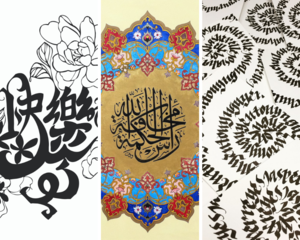 Admission:
$Pay What You Can

Materials will be provided.

About the Artists:
Rayna Lo was born and raised in Chicago, IL. Fueled by her passion to connect more to her Taiwanese heritage, she began learning traditional Chinese calligraphy to help bridge the gap. The memory of taking a Chinese paint brush class during her childhood Chinese school studies had prompted her to investigate the tools. She was also looking for a way for her to connect to her childhood; nurturing this blurry memory was a way for her to hold on to any culture that had been passed down to her. The study of the craft has led her to explore other art forms such as western calligraphy, painting, and illustration. She now resides in Boston, MA.

Hajj Wafaa born and raised in the old town of the city of Kufa in Iraq. He learned calligraphy from his uncle who was writing on fabric for businesses. In 1986, he started scripting ”thuluth”— the hardest style in Arabic calligraphy. Since then, he didn't stop learning and has mastered the most common styles of Arabic calligraphy. He graduated from Gibbs Boston in 2008 and holds a degree in Visual Communication-Graphic and Web Design. He teaches calligraphy in the greater Boston area. The year 2009 marks the first class he taught at ISBCC in the city of Boston. Now, he is teaching calligraphy for middle-high school at Al-Noor Academy. This fall, he will teaching at Worcester Art Museum in Worcester, MA. He has additionally hosted many workshops in and around Boston, MA— like at MFA, Harvard, Boston College, and more.

This series is Pay What You Can. We at the Pao Arts Center hope to support the arts and enrich the community. Any contributions you make go to support a fair wage for the teaching artists, materials, facility costs, as well as other students. We believe that arts and culture should be for anyone who experiences a budding or blazing interest.