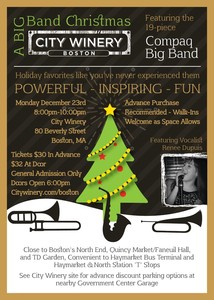 The Boston Pops’ Christmas concerts and ‘The Nutcracker’ ballet are timeless New England seasonal classics, but this year a spectacular new holiday jazz music tradition begins on ‘Christmas Eve Eve’ - Monday night December 23rd. The 19-piece Compaq Big Band debuts at the fabulous City Winery with ‘Boston’s Big Band Christmas’ - check out citywinery.com/boston. It will be an amazing evening filled with seasonal favorites like you’ve never heard them before - exciting, inspirational, and just plain fun. Even the biggest Grinch can’t help but get in the Christmas spirit!

The show will be 8:00pm-10:00pm. Tickets $30 in advance, $32 at the door. All seating is General Admission only. Doors open at 6:00pm. Advance ticket purchase is encouraged at citywinery.com/boston. With a phenomenal sound system and terrific sight lines, there’s not a bad seat in the house - but early arrival is suggested for best selection. They have a wonderful menu along with a great selection of wine, beer, and cocktails for before or during the show. Advance ticket holders are eligible for a discounted rate at the Government Center Garage – see the City Winery web site.

The Compaq Big Band is one of the longest continuously large-format jazz ensembles in New England. Formed in 1975, the group has performed for hundreds of clients across the region and beyond, impressing crowds at swing dances, gala celebrations, nonprofit fundraisers, music festivals, summer concerts, and legendary Boston area jazz venues. Among the band’s many accomplishments are a 10-day/7-gig tour of the United Kingdom, producing and warming up for sold out shows of Gordon Goodwin’s Big Phat Band, and several concerts featuring international high jazz trumpet virtuoso Wayne Bergeron. Their two commercial CDs – “Bandwidth” and “Hard Drive” - are played on New England Jazz National Public Radio, on BBC2 in the United Kingdom, and on Swedish public radio jazz programs. Check them out at www.compaqbigband.com or on Facebook.

City Winery is located at 80 Beverly Street in in the heart of Downtown Boston, close to familiar landmarks such as the Haymarket, the North End, TD Garden, and Fanuiel Hall/Quincy Market.