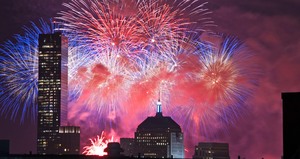 Boston Pops July 4th Spectacular is back after skipping a year due to COVID-19, but not on The Esplanade & Hatch Shell, yet on Boston Common…

“After careful consideration of recent issuances from the Centers for Disease Control and Prevention and the Commonwealth of Massachusetts easing restrictions on masking, physical distancing, and capacity allowances, the Boston Pops determined that in order to best ensure the health and safety of everyone involved, it was prudent to postpone its return to the Esplanade until 2022, when there would be adequate time to plan and execute the complex event, which usually entails a ten-month planning process involving multiple government agencies and many event and concert planning organizations.”

The Boston Pops July 4th Spectacular will be broadcast and streamed live at Tanglewood on Sunday, July 4, from 8-11PM on Bloomberg TV, Bloomberg Radio, Bloomberg.com, and in Boston on WHDH-TV Channel 7.

An allotment of FREE tickets to attend the concert in person at Tanglewood will be made available to the public starting Monday, June 21 at 10AM at tanglewood.org/july4. These tickets will be distributed on a first-come, first-served basis, with a four-ticket per household limit.