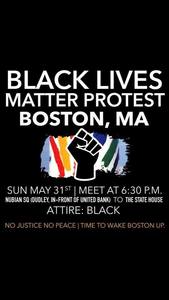 Black Boston is a community organization who is calling members, friends, allies, to join us in a protest on Sunday, May 31st, 2020 at 6:30PM EST.

We stand in solidarity of City Councilors Julia Mejia and Richard Arroyo’s proposition of a resolution in support of federal action condemning police brutality, racial profiling, and the use of excessive and militarized force. We are asking that this resolution be passed and that the Department of Justice insert themselves to investigate instances of police departments violating civil rights.

As a result, we are demanding for:

- Mandatory Implicit Bias Training for Police.
Psychiatric evaluation for officers before swearing them in and after each altercation where they’ve drawn their gun.

- Increasing the time officers spend in the police academy nationwide(federal legislation)
All govt. Officials in the city of Boston (and the entire Commonwealth of MA) publicly condemn acts of police brutality against black people

To contribute financially for justice, bail, and protestor defense organizations within the state of Massachusetts, feel free to donate to: https://www.massbailfund.org/donate.html