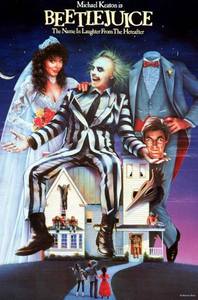 Our last film of the series ushers us into the Halloween season (or maybe the afterlife... who knows?) A little background from the critics, Devon and George:

Michael Keaton, Alec Baldwin, Geena Davis, and Winona Ryder star in the film which placed director Tim Burton in the Hollywood spotlight. In this dark comedy, newlyweds Adam and Barbara Maitland, played by Baldwin and Davis, meet an untimely demise after moving into their new home in Connecticut. Now ghosts, the couple are bound to roam the house as it is sold off to a new family. Desperate to reclaim their home from the recent inhabitants, they call upon the dubious spirit known as Beetlegeuse (pronounced Beetlejuice) in an infinitely quotable performance by Michael Keaton. While Beetlegeuse claims to serve and help the newly deceased couple, his actual goals are revealed to be far more nefarious.

While not his debut feature, "Beetlejuice" marks the arrival of Tim Burton as a unique vision in American film. While his macabre style would become more apparent throughout the following decade, this was when audiences were introduced to his idiosyncratic eye. The film also marks the breakthrough performance of Winona Ryder (Heathers, Stranger Things), the proto-goth daughter of the family moving into the Maitland house. With eye-popping visuals and a memorable soundtrack, "Beetlejuice" has managed live on as a cult classic due to the appreciation of its fans who refuse to see this movie “dead and buried.”