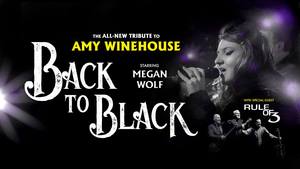 BACK TO BLACK: The Amy Winehouse Tribute! Saturday, May 11 at 8pm
starring MEGAN WOLF with special guest RULE OF 3   $25 | ALL SEATS!

Incredible lyrics. Undeniable talent. Signature eyeliner! Amy Winehouse challenged the industry and mastered the art of cross-genre vocals with her eclectic mix of Soul, Jazz, and Rhythm & Blues. Amy’s musical legacy has touched the lives of millions and is brought together in this ALL-NEW live tribute to the legendary performer.   Vocalist Megan Wolf takes audiences through a tour-de-force of Winehouse’s 5x Grammy-Award winning album Back to Black, plus Amy’s first album Frank along with other major hits! Backed by some of Boston’s best musicians, this tribute has played to SOLD OUT crowds across the Greater Boston area. Fan-favorites likes “Rehab”, “Back to Black”, “Love is a Losing Game”, “You Know I’m No Good”, and “Tears Dry On Their Own” will have audiences singing and swinging in celebration of all things Winehouse. OPENING ACT: Rule of 3

MEGAN WOLF
Megan Wolf is a dynamic vocalist drawing on the R&B-soul artists of yesteryear with a modern mix of Pop and Rock in every performance. Her latest release, “This Girl” delivers an honest, raw, and captivating collection of songs which she hopes inspires audiences to face their own challenges and fine courage and truth from within. Her powerful stage presence has led Megan to many note-worthy opportunities playing alongside Boston-guitarist Barry Goudreau, and on tour with Joe Cocker’s original band members Cliff Goodwin, Deric Dyer, and Mitch Chakour in their legacy project, "Mad Dogs Unchained"—which recently played their European Tour in 2018 and across New England this past November. A North Shore-native, Megan is highlighted as Cape Ann Guide Magazine’s featured artist of 2018 & 2019, and will be headlining this year’s Gloucester Harvest Music Festival in September. She is currently working on her second studio album, scheduled for release early this summer.

OPENING ACT!
RULE OF 3 is is a three-piece acoustic band from Boston’s North Shore. Deriving their name from the principal that everything’s better in 3s, the band has toured across New England delivering their own unique versions of hits from the 60s–90s. Over the last six-years, audiences have come to know and love Rule of 3’s signature three-part harmonies and creative arrangements, which make each performance an unforgettable celebration! Guitarist: Paul Carr | Bassist: Rich Marino | Drummer: Pat Seitz | Ruleof3band.com