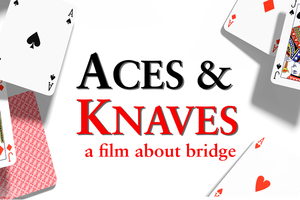 A polite pastime for retirees? No way! Bridge is a high-stakes whirl of brain against brain, in which top players compete as fiercely as Olympic athletes. Inventors, musicians, lawyers, scientists, Wall St. superstars, and young students are among the millions around the world who are obsessed.

ACES & KNAVES zooms in on the elite players, the scandals, and the intense competition inside the world of bridge—the most complex mind sport ever invented. Bill Gates is in it, as are many of the biggest names in the game. Neurologists and psychologists see bridge as a microcosm of life: Nail biting, self-flagellation, grueling preparation, and the sheer joy of victory are all on display at the tables.

The film follows the emotional story of the whistleblowers and code breakers who worked thousands of hours to expose two pairs of world-class bridge cheaters, one from Israel and another from Italy. Given the emotional toll that’s built into the game, it’s no surprise that bridge and cheating have a long, intertwined history.

ACES & KNAVES mixes vintage stills and old movie footage with dramatic coverage of international tournaments. An original score by Bessie winner and STOMP veteran Nicholas Van Young and striking animation and graphics by Lucien Harriot add to the look, the sound, and the beautiful imagery woven throughout the film.

An official selection at the 2019 Boston International Film Festival, ACES & KNAVES is aimed not only at bridge enthusiasts but also those who have never picked up a hand. Why? Because bridge holds a mirror to the human spirit—at its best and at its worst. And like life, it's all about the cards you're dealt. You have to make the best of them.