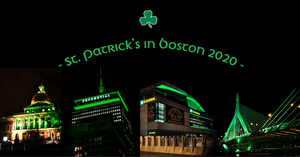 The Southie St. Patrick’s Day Parade has been canceled due to coronavirus precautions, but that doesn’t mean there aren’t plenty of other ways to celebrate St. Paddy’s in Boston. Go green with our picks for 30 concerts, parties, bar crawls, harbor cruises, and more this weekend and on St. Patrick’s Day itself.

1) Dropkick Murphys Boston Blowout
When: Friday to Tuesday, March 13-17, various times
What: Celtic rock/punk band Dropkick Murphys have long been synonymous with the city of Boston. The 2020 edition of the band's St. Patrick's Day Boston Blowout tour features five shows in three venues, including two brand new venues they've never played. These Boston shows will be the only dates the band is doing in the U.S. in March.

6) Samuel Adams Saint Patrick's Day
When: Friday and Saturday, March 13-14
What: Join Sam Adams Saint Patrick’s Day weekend for festivities throughout the Jamaica Plain brewery. Listen to live music in the tap room, and Brato will be on hand serving up bratwurst and grilled cheese to enjoy alongside a festive line-up of brewery-exclusive beers.

9) St. Patrick’s Day Party at Turtle Swamp Brewing
When: Tuesday, March 17, 6 p.m.
What: This is the first St. Paddy’s since the closing of Jamaica Plain’s iconic Irish pub Doyle’s Cafe. Turtle Swamp Brewing mourns the loss and pays tribute to their neighbor and friend on St. Patrick’s Day with live music from Thom Dunn, food from Penny Packer's, and 20 oz. pours of their new stout.

13) Time Out Market St. Patrick’s Day Event ft. Glendalough Distillery
When: Friday, March 13, 5 p.m.
What: On Friday, elevate your St. Patrick’s Day celebration and “go green” at Time Out Market with an event featuring Glendalough Wild Botanical Gin, an Irish gin sustainably made with wild, foraged mountain plants and distilled fresh each day in the “Garden of Ireland.” The event will benefit Emerald Necklace Conservancy.

14) Ireland Trip Giveaway at MJ O’Connor's
When: Friday, March 13, 8 p.m.
What: This is the Ireland trip giveaway party that used to be held at The Green Briar in Brighton, another beloved Irish pub that closed last year. On Friday night, check in between 7 and 10 p.m. then stick around, drink some green beers, and at the end of the night they’ll choose one lucky winner from the entries (must be present to win).

16) St. Patrick's Day Celebrations at Coppersmith
When: Friday to Tuesday, March 13-17
What: Coppersmith in South Boston will be celebrating St. Patrick’s Day in a big way with five festive days starting on Friday and finishing up on Tuesday, featuring traditional food and drinks, Irish step dancers and bagpipers, and live music.

17) St. Patrick's Day Pre-Party in Harvard Square
When: Thursday, March 12
What: Get a jump jig on St Patrick's Day Thursday at Beat Brew Hall with traditional Irish specials like corned beef and cabbage, Tullamore Dew Irish Whiskey, Harpoon beers and live music from Old Fox. The local folk-fusion heroes are getting in touch with their roots and going all Irish.

18) LepreCon Alley Pub Crawl
When: Saturday, March 14, 11 a.m.
What: Get ready for the warming up of spring by coming out and crawling the best bars that the Fenway neighborhood has to offer. Participating venues include Cheeky Monkey, Loretta's Last Call, Lansdowne Pub, Bar Louie, Cask n' Flagon, and more.

22) St. Patrick's Day 2020 at Ned Devine’s
When: Thursday to Tuesday, March 12-17
What: Ned Devine’s in Faneuil Hall celebrates its favorite day of the year with a special menu and live music on Friday and Saturday nights, and beginning at 3 p.m. on Tuesday.

23) St. Patrick's Live Irish Music Cruise
When: Fridays and Saturdays, March 13-27, various times
What: The Boston skyline makes a beautiful backdrop for Irish band Curragh, performing traditional Irish music aboard the Northern Lights. Fill the harbor with the sounds of fiddles, banjos, uilleann pipes, and more, along with a bar stocked with your traditional Irish libations like beer and whiskey.

24) St. Patrick's Brunch Cruise
When: Saturday and Sunday, March 14-15, 10 a.m.
What: Celebrate St. Paddy’s weekend with a traditional Irish brunch and live Irish music by Curragh. Start your day with bacon rashers, soda bread, sausage, and more, plus drinks from the bar.

25) St. Patrick's Lunch-n-brews
When: Saturday and Sunday, March 14-15, 1:30 p.m.
What: Pair your Guinness and other Irish brews with a traditional Irish lunch aboard the festively decorated Northern Lights motor yacht. While aboard, keep your Irish spirit going and enjoy live traditional Irish music.

28) The Chieftains
When: Friday, March 13, 8 p.m.
What: Celebrity Series of Boston brings The Chieftains to Symphony Hall on Friday. The six-time Grammy Award-winners have long been recognized for reinventing traditional Irish music on a contemporary and international scale.

29) The Irish Tenors
When: Friday, March 20, 8 p.m.
What: Playing at Medford’s Chevalier Theatre on Friday, The Irish Tenors have been the acknowledged Celtic music kings since they burst upon the scene during a 1998 special. With ten best selling CD’s to their credit, they share company with the likes of The Three Tenors and Andrea Bocelli as the biggest money makers PBS has presented.