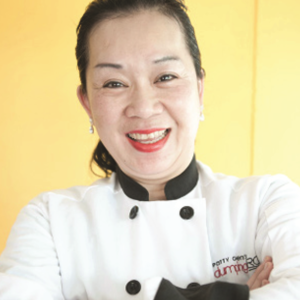 Chef Patty Chen was born in the Southern Taiwanese Port of Kaohsiung. Her father emigrated from China 20 years prior. Along with four siblings, her mom & dad, they opened their first restaurant called "The Four Seasons Dumpling and Noodle House". She was only eight years old at the time, but learned quickly from her mother and father how to make delicious dumplings! Every day after school, she would roll, stuff and fold the dumplings for the next day’s business.

When the family came to America, she opened two restaurants with her father, the PuPu Hot Pot (1993), subject of the book "World’s Best Restaurant Names" by Ben Brusey, and the Taiwan Café (1997) in Cambridge. At this point, she branched off by herself, opening All Asia Bar and Lounge (2000), where she started cooking for private parties and teaching dumpling-making to her American clients. Along the way, she was joined by her husband, Marc Shulman. "Chef Marco" would go on to become the "Chief Dumpling Officer" of her business and launched the Dumpling Room and Dumpling School in 2013. This is where she decided that Dumplings would become the main focus of her business.