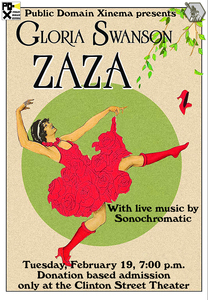 Taking his place to play the score for a classic silent film at the Somerville Theatre, accompanist Jeff Rapsis has no sheet music on his keyboard. It's because he's improvising the music, or making it up on the spot.

But on Sunday, June 2, he'll have a head start for 'Zaza' (1923), a romantic melodrama starring Gloria Swanson that's playing at Somerville at 2 p.m. as the latest installment of the venue's 'Silents, Please!' series.

Admission is $15, with discounts for seniors and students.

In 'Zaza,' Swanson stars as a temperamental music hall performer in a provincial French theater who falls in love with a high-ranking diplomat played by H.B. Warner.

The film chronicles their romance as it takes unexpected turns both comic and dramatic. The Paramount feature was regarded as one of the studio's major releases of 1923, helping establish Swanson as a major star of the era.

In 2017, Rapsis created the recorded soundtrack for the much-anticipated release of 'Zaza' on DVD/Blu-ray by Kino-Lorber, which specializes in re-releasing classic films.

"It was a real thrill to put together a musical score for this great feature film, which has never been available for home viewing before," Rapsis said. "I feel like I've collaborated with Gloria Swanson and the team that made this film."

The Kino-Lorber edition of 'Zaza,' with music by Rapsis, was released to enthusiastic reviews.

"With a DTS-HD MA 2.0 piano score from composer Jeff Rapsis that follows the original 1923 cue sheet, this is a pretty fantastic score for the film," wrote Matthew Hartman of Hi-Def Digest. "The piano work gives the film a nice old-time feel with the right blend of jaunty entertainment and hitting the lower dramatic tones. It never feels overly dramatic or too wild and fits the tone of the film perfectly."

For most titles in its 'Silents, Please!' series, the Somerville uses 35mm prints. Because the only surviving 35mm print of 'Zaza' is in the Library of Congress, a digital transfer will be used for the June 2 showing.

For the Somerville screening, Rapsis will recreate the score he compiled for the DVD release.

The music was based on a surviving "cue sheet" from the studio that offered suggested music to play when the film was in theatres in 1923.

"Some of the suggestions seemed right on, while others didn't," Rapsis said. "Just like musicians of the silent era, I followed some, and in other places created my own material."

Using it today, however, creates problems, Rapsis said, because the tune is identical to the song 'I Can't Help Falling in Love With You' popularized by Elvis Presley.

"If you're not careful, it can sound like you're using a 1950s Elvis hit to accompany Gloria Swanson in post-World War I France," Rapsis said.

He addressed the problem by playing the tune with a classical accompaniemnt, and also making minor changes to "de-Elvis" the melody.

"I think it worked," Rapsis said. "So far, no one has complained that I was channeling the King."

Rapsis has been creating live scores for silent films for the past decade, and currently performs for more than 100 screenings each year.

His standard approach to scoring silent films is to improvise the score on the spot, as a movie is screening.

"It's kind of a high wire act to do the music this way. But it provides an energy and excitement that contributes to the experience," Rapsis said.

"For a film I don't know, I'll run through it once or twice on DVD prior to the public screening, to make sure I understand the story's arc and any big moments. Any more than that, and I find a movie begins to get too familiar, and I find I start to overthink the film or anticipate things during the screening, and that gets in the way of things flowing in the theater."

Once a film is underway, Rapsis plays continuously, providing music to underscore what's onscreen—not just the action, but emotional shifts and plot twists that can often build to powerful climaxes. He provides full orchestral scores for dramas, westerns, action/adventure films, and horror flicks, all of which first became popular as the silent film era peaked in the 1920s.

Silent film programs can last anywhere from one to three hours in length. Rapsis finds that after the first 10 or 20 minutes, he sinks into a state of mind where he is completely absorbed by the process of scoring the movie, and the music sometimes seems to weave itself as he responds to the film in real time.

"At it's best, creating music in real time is a grand journey into the subconscious," he said. "Once I get 'in the zone,' I'm not aware of time passing, although part of me is always conscious of what's on screen, what's likely to happen next, and what the audience reaction may be. And I adjust as I go—to help a film 'grab' a restless audience at a big moment, sometimes it helps to stop playing for a bit, which really punctuates the drama."

"Silent film accompaniment is kind of a lost art, but once I tried doing it, I found I could naturally come up with music that helped these films come to life," Rapsis said. "And I really enjoyed the process because it combined two things I really loved: silent film and music. For me, it was like putting chocolate and peanut butter together."