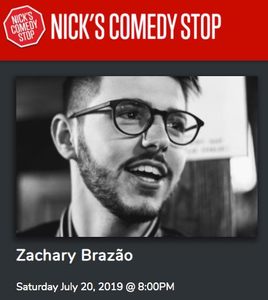 Zach is very funny and he is headlining Nick's on July 20th.

Zach’s jokes will have you laughing at Arena Football one minute and crying about the Triangle Shirtwaist Factory fire the next. His major influences include the American Pageant History Textbook and Keno lounges throughout the South Shore. He is currently reading the Personal Memoirs of Ulysses S. Grant. He is the cohost of the Series Finale Podcast where he and two other comedians watch the final episode of a show they have never seen.