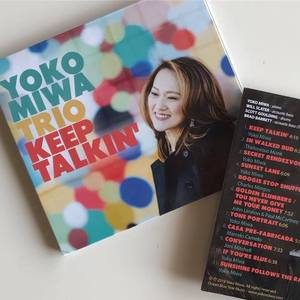 Jazz clubs may be closed, but live jazz goes on! Join Yoko Miwa for live online shows every Friday and Saturday night starting at 9 pm ET.

A message from Yoko: “I can’t even remember the last time I wasn’t performing somewhere on a Friday night. During these stressful times, I thought I would try to create a sense of normalcy for my fans – and for me – by continuing to perform. Last Friday I decided to play on Facebook Live and got such an overwhelming response that I decided to do so again on Saturday night. Unlike regular videos, where you can do several takes, live video has the energy of being in the moment which is vital to jazz. I will continue to do live streamed solo piano performances from my home studio in Boston on Friday and Saturday nights at 9 PM ET until my audiences and I can meet again in person. I hope this will bring joy to listeners during these difficult times and that everyone stays safe and healthy.”

Internationally acclaimed pianist/composer Yoko Miwa is one of the most powerful and compelling performers on the scene today. Her trio, with its remarkable telepathy and infectious energy, has brought audiences to their feet worldwide. Their latest CD, 2019’s Keep Talkin’, showcases Miwa’s fine playing and artful compositions and the trio’s uncanny musical camaraderie. DownBeat gave the recording four stars, calling it “a beautifully constructed album” and noting “the drive and lyricism of a pianist and composer at home in bebop, gospel, pop, and classical.” JazzTimes also reviewed the album favorably, praising Miwa’s “jaw-dropping degree of technique.” The album enjoyed seven weeks in the top 10 on Jazz Week’s charts, much like its predecessor, Miwa’s 2017 release Pathways, which also made Jazz Week’s top 10 for several weeks. In a 2017 feature article on Miwa, DownBeat noted her “impressive technique and a tuneful lyricism that combines an Oscar Peterson-ish hard swing with Bill Evans-like introspection.”

For the past decade Miwa’s trio has played regularly at major jazz clubs in their home city of Boston, as well as venues around the world. A favorite of Jazz at Lincoln Center, Miwa was chosen to play on “Marian McPartland & Friends,” part of the Coca-Cola Generations in Jazz Festival. She was also chosen to perform at Lincoln Center’s annual Jazz and Leadership Workshop for The National Urban League’s Youth Summit. Miwa also appears regularly at New York’s famed Blue Note Jazz Club and has performed and/or recorded with a wide range of jazz greats including Sheila Jordan, Slide Hampton, Arturo Sandoval, George Garzone, Jon Faddis, Jerry Bergonzi, Esperanza Spalding, Terri Lyne Carrington, Kevin Mahogany, John Lockwood and Johnathan Blake among others. In 2018 she performed on the main stage at the Atlanta Jazz Festival and the Litchfield Jazz Festival, where her trio drew the largest audience of any act. She is a Yamaha Pianos Artist, JVC Victor Entertainment recording artist, 2019 Boston Music Awards Jazz Artist of the Year, and Boston Phoenix Best Music Poll winner.