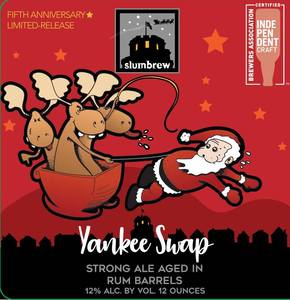 The working plan is to release 4-packs of Somerville Brewing Company's 2018 Yankee Swap at 4PM on Friday, December 7th. Some of our previous years will will be on tap as 5oz pours for you to enjoy, compare and celebrate with us.

Pay as you go. No Reservation.

A note from Caitlin one of our owners:
Here's the story...

Six years ago we first brewed our holiday ale called Yankee Swap. It was just the two of us back then so Jeff and I filled barrels with the help of a few friends. In our first go we were hoping for a classy beer for office gift giving and really psyched to use freshly dumped rum barrels from our friends Turkey Shore Distillery. To our surprise, Yankee Swap 2015 developed a cult following so we decided to keep it going as a series.

The beautiful part of rum barrel aged beers is the warming notes of toast and char. The reality, however, is they really require a tremendous amount of cellar work from our brewers. In the first weeks they weep delicious candy strings requiring "do not lick the barrels" signs. Keeping them the correct temperature, pulling samples as the beer matures, minding corks, bungs and vents all while they sleep for a few months is satisfying work. After Thanksgiving we'll decant for conditioning and can in the first week of December. ALL of us are incredibly proud of this year's 5th year anniversary edition. at 12% abv we hope you will pour it in your favorite stem glass by the fire and then shoot us a #YankeeKrunked tweet.