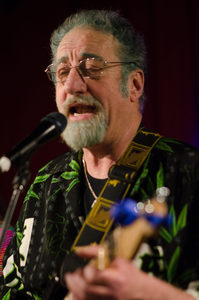 Jacques Pardo is a cornerstone of the Boston world music scene as a multi-instrumentalist (vocals, guitar, sax, oud) an award-winning composer and a music producer. Music brought him to Boston in 1988 on a tour with the Arab/ Palestinian /Jewish/Israeli band: “Local Music.” But meeting his future wife, it was love that made him stay. After touring with several blues and funk bands, Jacques formed the award-winning, multicultural, world music ensemble Atlas Soul in 2000.Atlas Soul’s motto, “world music for world peace,” spells out its philosophical and political goal: to inspire world peace through a fusion of music and culture that gets people to the dance floor.

Event is free via Zoom, but registration is required